Six Seconds at the Science Fair 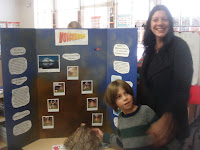 Robby loves science. We love Robby. And, as can be seen in the short video, time passes FAST.

Posted by johnny_mango at 12:16 PM No comments:

EDO--Taken from in front of The Daily Grind, this view of downtown and "EDO" gives a sense of both the old and the new. 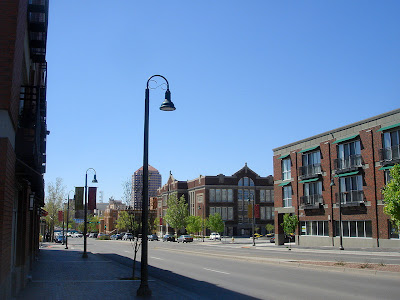 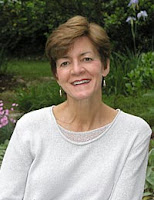 One big test of the endurance of any relationship is taking on a joint improvement project. Here Sue Ellen Thompson offers an account of one such trial by fire.

My parents argued over wallpaper. Would stripes
make the room look larger? He
would measure, cut, and paste; she�d swipe
the flaws out with her brush. Once it was properly

hung, doubt would set in. Would the floral
have been a better choice? Then it would grow
until she was certain: it had to go. Divorce
terrified me as a child. I didn�t know

what led to it, but I had my suspicions.
The stripes came down. Up went
the flowers. Eventually it became my definition
of marriage: bad choices, arguments

whose victors time refused to tell,
but everything done together and done well.

Reprinted by permission of the author. Copyright © 2006 by Sue Ellen Thompson, from her book, "The Golden Hour," published by Autumn House Press. This weekly column is supported by The Poetry Foundation, The Library of Congress, and the Department of English at the University of Nebraska-Lincoln. This column does not accept unsolicited poetry.
Posted by johnny_mango at 10:36 AM No comments: 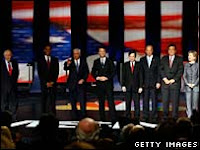 OSUNA & VISTA DEL NORTE NE--MaryAnn and I ate brats and watched the whole thing at the home of Joaquin Guerra last night...over two head-busting hours of circuitous reasoning and nuanced performances. Oh...I got pages of notes. But what it comes down to is this: THE RANKINGS. Let's see who won, who lost, and where everybody finished in the pack. 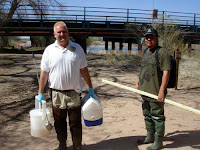 CORRALES BRIDGE--A man playing in river water is enough to arouse the curiosity of most men...including Yours_Truly. The interview is posted on the Duke City Fix.
Posted by johnny_mango at 2:37 PM No comments:

BARELAS--Route 66 ran right through Barelas prior to 1937. This view from south 4th Street still has a few remnants from earlier times, but nothing that goes back that far. The appliance store has been around for over 40 years. But probably the most interesting feature is the ghost of the "Royal Fork Buffet" sign that is visible on the right hand side of the street.

For years I had seen the points at the top and the word 'royal' always came to mind...sort of a crown in the sky. It wasn't until a few years ago that I also clicked to the 'fork' aspect of those points. 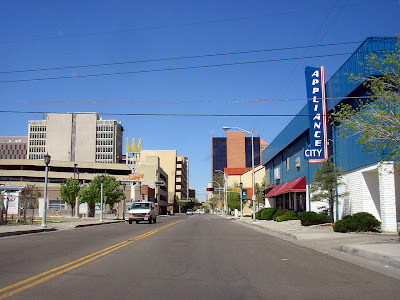 To use as wallpaper, click on the image to enlarge, then right-click and select "desktop background."
Posted by johnny_mango at 8:26 AM No comments: 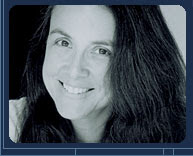 Naomi Shihab Nye is one of my favorite poets. She lives in San Antonio, Texas, and travels widely, an ambassador for poetry. Here she captures a lovely moment from her childhood.

(For a transcript of her Frontline interview with Bill Moyers click here).

My brother, in his small white bed,
held one end.
I tugged the other
to signal I was still awake.
We could have spoken,
could have sung
to one another,
we were in the same room
for five years,
but the soft cord
with its little frayed ends
connected us
in the dark,
gave comfort
even if we had been bickering
all day.
When he fell asleep first
and his end of the cord
dropped to the floor,
I missed him terribly,
though I could hear his even breath
and we had such long and separate lives
ahead.

Reprinted from "A MAZE ME," Greenwillow, 2005, by permission of the author. Copyright Naomi Shihab Nye, whose most recent book of poetry is "You and Yours," BOA Editions, Ltd., 2005. This weekly column is supported by The Poetry Foundation, The Library of Congress, and the Department of English at the University of Nebraska-Lincoln. This column does not accept unsolicited poetry.
Posted by johnny_mango at 5:06 AM No comments: 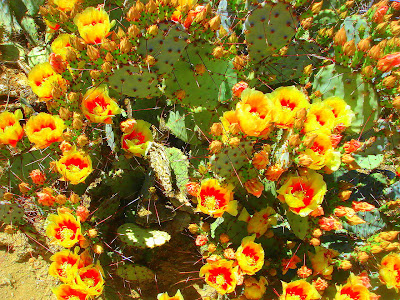 To set as wallpaper, click on image to enlarge then right-click and select
Posted by johnny_mango at 10:13 PM 2 comments:

By describing the relocation of the moles which ravaged her yard, Washington poet Judith Kitchen presents an experience that resonates beyond the simple details, and suggests that children can learn important lessons through observation of the natural world.

First we tamp down the ridges
that criss-cross the yard

then wait for the ground
to move again.

I hold the shoe box,
you, the trowel.

When I give you the signal
you dig in behind

and flip forward.
Out he pops into daylight,

We nudge him into the box,
carry him down the hill.

Have we let them all go
at the very same spot?

Will they find each other?
We can't be sure ourselves,

only just beginning to learn
the fragile rules of uprooting.

Poem copyright © 1986 by Judith Kitchen, whose most recent book is the novel, "The House on Eccles Road," Graywolf Press, 2004. Reprinted from "Perennials," Anhinga Press, 1986, with permission of the author. This weekly column is supported by The Poetry Foundation, The Library of Congress, and the Department of English at the University of Nebraska, Lincoln. This column does not accept unsolicited poetry.
Posted by johnny_mango at 9:54 PM No comments:

NOB HILL--How many dads build a halfpipe for both him and his son? Well, Vitus did. Here is Luke on the day after Vitus finished it. By the way, Vitus, Luke, and Sally live in the big log cabin across the street.

Posted by johnny_mango at 9:56 PM No comments: 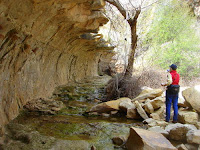 CARLSBAD, NM--There is more information about the Falls and nearby camping posted on this morning's Duke City Fix. If you are thinking about going there, you might want to check it out.
Posted by johnny_mango at 9:17 AM No comments:

BRANTLEY LAKE, NM--On a trail that winds through the hills around the Brantley Lake campground, we came across this yucca. We saw many on our trip through southern New Mexico and the Big Bend country of Texas, but this was the first we saw about to bloom. No wonder it is the New Mexico State Flower...and has been since 1927. 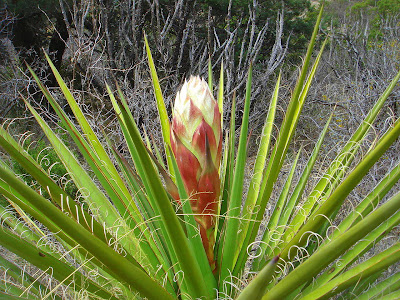 Remember...to use as wallpaper, click on image to enlarge, then right-click and select 'set as desktop background.'
Posted by johnny_mango at 2:36 PM No comments:

I've talked often in this column about how poetry can hold a mirror up to life, and I'm especially fond of poems that hold those mirrors up to our most ordinary activities, showing them at their best and brightest. Here Ruth Moose hangs out some laundry and, in an instant, an e

veryday chore that might have seemed to us to be quite plain is fresh and lovely.

All our life
so much laundry;
each day's doing or not
comes clean,
flows off and away
to blend with other sins
of this world. Each day
begins in new skin,
blessed by the elements
charged to take us
out again to do or undo
what's been assigned.
From socks to shirts
the selves we shed
lift off the line
as if they own
a life apart
from the one we offer.
There is joy in clean laundry.
All is forgiven in water, sun
and air. We offer our day's deeds
to the blue-eyed sky, with soap and prayer,
our arms up, then lowered in supplication.

Reprinted from "Making the Bed," Main Street Rag Press, 2004, by permission of the author. Copyright © 1995 by Ruth Moose, whose latest book of poetry, "The Sleepwalker," Main Street Rag, due out in 2007. This weekly column is supported by The Poetry Foundation, The Library of Congress, and the Department of English at the University of Nebraska, Lincoln. This column does not accept unsolicited poetry.
Posted by johnny_mango at 2:24 PM No comments: