The Sunday Poem: Jim Harrison, Author of Legends of the Fall...Wow! 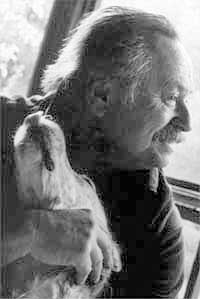 Jim Harrison once said, "I'm a poet and we tend to err on the side that life is more than it appears rather than less."

Walt Whitman's poems took in the world through a wide-angle lens, including nearly everything, but most later poets have focused much more narrowly. Here the poet and novelist Jim Harrison nods to Whitman with a sweeping, inclusive poem about the course of life.

At dawn I heard among bird calls
the billions of marching feet in the churn
and squeak of gravel, even tiny feet
still wet from the mother's amniotic fluid,
and very old halting feet, the feet
of the very light and very heavy, all marching
but not together, criss-crossing at every angle
with sincere attempts not to touch, not to bump
into each other, walking in the doors of houses
and out the back door forty years later, finally
knowing that time collapses on a single
plateau where they were all their lives,
knowing that time stops when the heart stops
as they walk off the earth into the night air.

"Marching," from Jim Harrison's "Saving Daylight" (2006) is reprinted by permission of Copper Cayon Press This weekly column is supported by The Poetry Foundation, The Library of Congress, and the Department of English at the University of Nebraska-Lincoln. This column does not accept unsolicited poetry.
Posted by johnny_mango at 10:59 AM

simply awesome, the work of this men is so inspired, you can read it and read it, and you never tired to read this incredible poem, and this is one of the best.