Border Folly: The Rest, Including Day #3...We Cross Paths With the New York Times 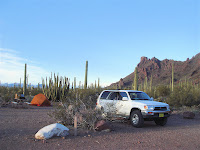 NOB HILL--We made it back about a week ago. We had no internet connection for the rest of the trip. I got sick and put nothing up about the finish. This led to an interesting development.

We had spent the third night at Organ Pipe National Monument...at their backcountry campground. There were only 4 sites, pit toile 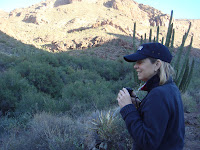 ts, no water, no shade. They were perfect.

By mid-afternoon all the sites were occupied: two by single men who looked like they had given themselves over to the focused, sun-baked look of desert fever, and a young couple who never left their campsite. Everything was peaceful enough. Especially at night once the older wild man quit talking to himself. And the young woman in the next tent quit her rhythmic barking.

Anyway we hiked in the afternoon, ate a good supper an 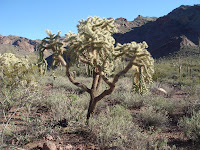 It is a very lush part of the southwest, warm and full of vegetation. Our campsite was fortunate enough to have the only organ pipe cactus that was actually in the campground. Saguaros were everywhere, as was mesquite, creosote bush and some other native plants. 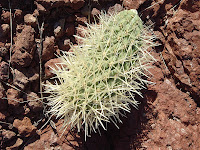 g was what is called the Jumping Cholla. This single-stemed cholla has lots of spikey balls attached to its arms that attach themselves to passersby. They don't actually 'Jump,' but they come off the plant extremely easily. In fact, they fall off.

They stick pretty good to your flesh, however. And you can't touch them to pull them off. A ranger recommended using a forked stick.

The New York Times Connection
Anyway, I picked up a copy of this Friday's NYT and found that in the Escapes secti 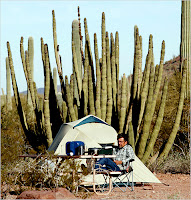 on, Keith Mulvihill had written a piece on the Arizona Borderlands entitled "A Road Trip On the Edge Of America." He mentions Organ Pipe National Monument. It is a wonderful piece with a lot of information. I will say that Organ Pipe NatMon is definitely at the edge of America: right on the Mexican border and totally out of the way...except that the highway through the Park is the main road from the USA to Puerto Penasco (otherwise known as Rocky Point).
The NYT article has a picture of our campsite! That guy Keith probably moved the picnic table just a hair, but that is definitely our site! I keep wondering about that woman's barking...was that the Times reporter at work? Who knows. 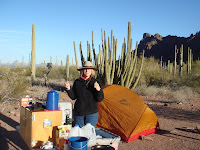 We may have been there at the same time. Maybe not. But I'll tell you one thing: we ate better than they did. Beef Stroganoff for supper. Pan fried potatoes, sausages, eggs, and green chile for breakfast.
Posted by johnny_mango at 7:19 PM 2 comments: