Good-Bye to the Bike 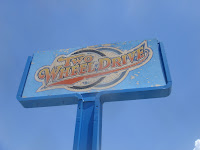 NOB HILL--The Big Bike Trip goes all the way across the U.S.A....from the Pacific to the Atlantic. But first I have to get my bicycle to the west coast. I am shipping it to a bike shop in Astoria, Oregon where it will be unpacked, assembled, and waiting for me on the 14th of July when I should be picking it up.

Actually I had been having some trouble with the wheels, three broken spokes in the last few months. So I took the bi 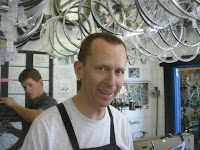 cycle, a Gary Fisher mountain bike, to Two-Wheel Drive near Central and University. Jeff rebuilt the wheels using a heavier gauge spoke. He also used stainless steel rather than the anodized spokes that came as original equipment. That done, he packed it up and was just finishing when I stopped in to pick up the box. 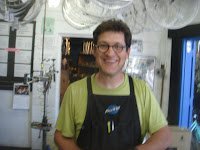 tires are the best I have ever owned! I already had replaced the tires with Schwalbe Marathons (26x1.5). These tires are supposed to be virtually indestructible. Well I stood around and talked to Jeff and shop owner Charlie for a while...even managed to talk Charlie out of a tee-shirt. I'll wear it for tomorrow's post. 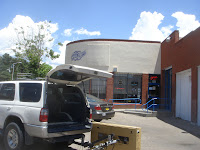 But the real BIG thing was that they packed up my bike for free! "Think of it as our way of supporting your trip," said Charlie. Wow.

There was a time when Two-Wheel Drive was bike touring headquarters for New Mexico. Then mountain bikes came along and sort of redefined the bicycling movement. Or maybe it was that my generation grew up and got serious jobs and no longer went on extended bike tours. At any rate, here's hoping bike touring gets popular again. And Two-Wheel Drive has the history to be right at the forefront. They know how to take care of bike tourers. 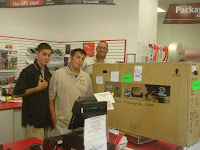 The last thing I had to do was to drive up the street a few blocks and drop off the box at the UPS Store. I did it. For roughly $111 the bike is being shipped to Bikes & Beyond in Astoria. They receive, assemble, and store bikes for $50. If you want to put it back together yourself, they will receive it and store it in their basement for ten bucks. They will even let you put it back together in their basement. It just make you smile!
Posted by johnny_mango at 8:14 PM 3 comments: 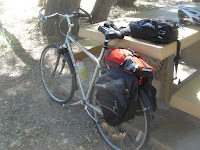 CENTRAL & TINGLEY DR. NW--Oh, did I mention that starting July 14th I will be riding my bicycle across America? This is the Transamerica Trail first designated during the bicentennial year of 1976. It goes from Astoria, Oregon to Yorktown, Virginia. Joining me for at least the first thousand miles will be my biking partner Mike (Mike Biker) Moye. I hope he pedals with me longer.

At any rate I am in training. My body is not perfect...however, I decided not to wait until it was. My plane ticket to Portland is for July 13th...Friday the 13th that is. 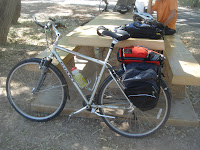 bike mechanic, Jeff. So I am riding my #2 bicycle, this 10-year-old Giant hybrid. It does deserve some respect: it has carried me over 11,000 miles without a lot of problems.

I've got it loaded down this week with everything from a gallon of water to a hatchet and a couple of propane bottles. I have been riding 34 miles each day this week carrying this weight of about 15 to 20 pounds. Most of the time it has been in the heat of the day, around 95 or 100 degrees.

I can't seem to think about anything except the ride.
Posted by johnny_mango at 6:49 PM No comments:

Wallpaper: View from The Icefields Parkway in Canada

ALBERTA, CA--If you have never been north of the border, apply for your passport and do it. Nothing in the Duke City can prepare you for the majesty of the trip. Starting with U.S. Route 550 in Bernalillo north to Jasper, Alberta, it is one incredible scene after another. And you never grow tired of it. 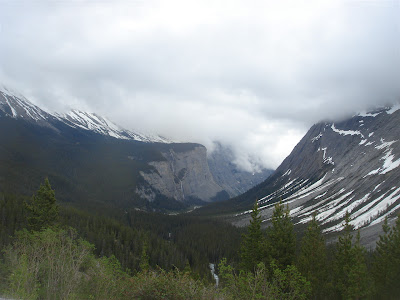 Posted by johnny_mango at 4:32 PM No comments: 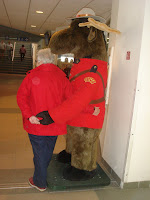 SUMWAPTA PASS, ALBERTA, CANADA--MaryAnn and I have been on vacation for a few weeks and I have not been taking care of business. But all this is about to change as I am embarking on an epic (for me) adventure lasting about three months. In the meantime, here are a few of the sights from our trip north.

Whatever that moose is doing with his hand on that woman's ass she certainly doesn't seem to mind. Those Mounties! They just look so handsome in their red jackets!
Posted by johnny_mango at 6:43 PM 1 comment: