NORTH OF CARLSBAD, NM--New Mexico is full of hidden treasures...most of them are somewhat small, but spectacular nonetheless. Take Sitting Bull Falls, for instance. It is located in the Lincoln National Forest just to the north of Carlsbad and Guadalupe National Park. It gets way fewer visitors, but is every bit as spectacular as the Guadalupe NP. (Nothing is as wonderful as Carlsbad Caverns!)

Posted by johnny_mango at 9:03 PM No comments: 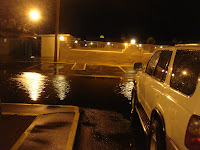 DAY'S INN MOTEL--Well, we're dry and safe in Texas. We had a great time last night camping at Brantley Lake, and then we spent most of the day hiking at Sitting Bull Falls. But the weather turned bad as we looked for a new camp site in the Guadalupe Mountains National Park.

So we opted to continue on another 50 miles to Van Horn, Texas. We got a motel room and then the sky opened up. We ate supper at a nearby restaurant and listened to stories from drivers who had been east, west, and south of here...hail, zero visibility on the freeway, flooding in Pecos, 9 inches of iceballs on the roads.

We are glad to be here. Tomorrow we continue on to Big Bend National Park. We hope for good weather.
Posted by johnny_mango at 9:39 PM 2 comments: 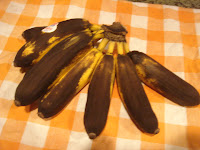 NOB HILL--MaryAnn and I had bought some little bananas and they were pretty expensive...much too expensive to compost just because they were turning black. "Google 'em," said MaryAnn. This is what I found. And NO, I am not making this up.

It sounds ludicrous, but it works. Take two overripe bananas and mash them slightly. Take an old bra and put it on. Place the mashed bananas inside your bra and leave it on for about 30 minutes. The effects can last up to 3 days. Because this is messy I recommend you only use before special events or at night when you're not likely to have company. Good luck. Take care of yourselves and those you love. And may your breasts be as perky as they were in High School.

MENAUL & CARLISLE NE--We head towards the valley and into a western sky. 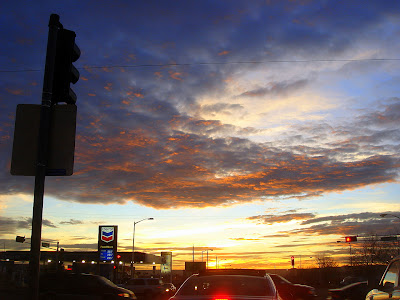 Posted by johnny_mango at 8:27 PM No comments:

The Sunday Poem: Rick Snyder...How Are You Doing?

One of the ways a poet makes art from his or her experience is through the use of unique, specific and particular detail. This poem by Rick Snyder thrives on such details. It's not just baseball caps, it's Tasmanian Devil caps; it's not just music on the intercom, it's James Taylor. And Snyder's poem also caught my interest with the humor of its flat, sardonic tone.


How Are You Doing?

As much as you deserve it,
I wouldn't wish this
Sunday night on you—
not the Osco at closing,
not its two tired women
and shaky security guard,
not its bin of flip-flops
and Tasmanian Devil
baseball caps,
not its freshly mopped floors
and fluorescent lights,
not its endless James Taylor
song on the intercom,
and not its last pint of
chocolate mint ice cream,
which I carried
down Milwaukee Ave.
past a man in an unbuttoned
baseball shirt, who stepped
out of a shadow to whisper,
How are you doing?

Reprinted from "Barrow Street," Winter, 2005, by permission of the author. Copyright © 2005 by Rick Snyder. This weekly column is supported by The Poetry Foundation, The Library of Congress, and the Department of English at the University of Nebraska-Lincoln. This column does not accept unsolicited poetry.
Posted by johnny_mango at 8:17 PM No comments:

Kate Nelson's "In Focus," which airs tonight at 7:30 on Channel 5, will feature Democratic Chairman John Wertheim, Republican Chairman Allen Weh, Right-wing blogger Mario Burgos, and that coffee-swilling boulevardier, Johnny_Mango. (What's HE doing there?) This will be in the second segment of the show and concerns the political ramifications of the Iglesias / Domenici / Wilson situation.
Posted by johnny_mango at 1:05 PM No comments:

Iglesias Threw the Election to his "Ally" Heather Wilson

NOB HILL--I have already made the point that former U.S. Attorney David Iglesias consciously hid those unethical phone calls he received from Sen. Domenici and Rep. Wilson. He hid them from both the public and the Justice Department. And he would have kept silent about them forever if his former mentor and ally had remained loyal to him. But they didn't...and so now we have Iglesias testifying he felt "sick" and "leaned on" in the most personal terms and in front of the whole U.S.A.

Here we have a man who knew he had the outcome of the election in his hands: if the indictments came down before November, Heather Wilson wins...and if he reports the phone calls, Heather loses. This congressional race was that close, being eventually decided by only a thousand votes.

In front of the Senate Judiciary Committee Iglesias stated that he didn't report the calls because he was "conflicted." He added, "I wanted to stay out of politics." But he did have an ethical obligation to report the calls at least to the Justice Department. Not only that, he was bound by department policy to do so. It was solely a personal decision based on friendship that drove him to stay silent until after the election.

David Iglesias ran for NM Attorney General as a Republican the same year that Heather Wilson made her first run for U.S. Congress. She won; he did not. But he considered her an "ally" and said so in front of the Senate committee. Pete Domenici was the man who was responsible for Iglesias being named U.S. Attorney. Indeed, Iglesias was being groomed for another run for political office...possibly for Heather's seat if and when she ran for Domenici's Senate position.

David Iglesias had a lot to gain for keeping silent. "I wanted to stay out of politics," is what he said. "I'll keep our secret," is what he meant. Did David Iglesias throw the election? Did his public duty get subverted by his alliances with Domenici and Wilson? Yes...and Yes.

Just like in the movies, when the Godfather comes calling in a favor, guys like David Iglesias are supposed to say, "Yes...anything for you Godfather." But instead his mouth opened and nothing came out. When Domenici then hung up on him, David Iglesias' future in statewide politics was over.
Posted by johnny_mango at 10:41 PM 5 comments:

I didn't ever have Gene as a teacher, but for the last few years I would run into him about suppertime in Mannie's restaurant. We did kno 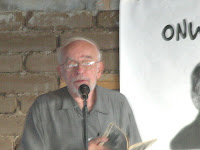 w each other from mutual acquaintances, specifically poets Diana Huntress and Dianne Duff.

The title of his 1998 book has to be one of the best titled books ever...and certainly worth thinking about in terms of his passing: The Old Man Who Swam Away and Left Only His Wet Feet. We still have those wet feet of his, several volumes of them.

I last heard Gene read at the Robert Creeley Memorial in September of 'o5. I couldn't get a good picture of him in the dim light. I hope the following poem from Santa Fe Broadside will serve even better.

It will be hard to erase each other
now that she is a beauty in my lines
I had no longer thought to find there.

Even should she move to another vision
of herself and me, I have her written
in immovable ink through my mind’s

open spaces, where she can be at ease
in her dreams, and mine. This affinity
subverts in thought other obligations

thicker than easy passage from now to then.
Our words are the clasp that holds us
together, but after they are all spoken

what can engender in us a certain place
wherein we can see each other a step up
from limbo? Patience. Let the lines stand

as long as they can. When they fall,
even then, I will hold her, speechless,
the lines still there, still held to their page.

Why Iglesias Didn't Rat Out Wilson and Domenici Last Fall

NOB HILL--Former U.S. Attorney David Iglesias only made one mistake when he recounted his telephone calls with Congresswoman Heather Wilson and Senator Pete Domenici: he didn't report the conversations to the Justice Dept. immediately. The story is well told in tonight's ABQ Tribune. And he explained it on NPR tonight by saying he was "stunned" at the perceived pressure being put on him by Wilson and Domenici to bring indictments against local Democrats before last November's election. He was too stunned to report it. Then, he said, he thought everything would just blow over. He added, "I was wrong."

Boy howdy. He is scheduled to testify before a Senate committee next Tuesday where, he says, he will be under oath to tell the truth. I might add this needs to be the WHOLE truth.

I believe that Iglesias, a loyal and dedicated Republican, consciously did Wilson and Domenici a favor by not reporting their actions before that election. Wilson's contest against Patricia Madrid was close. In fact Wilson might have been trailing in the polls when she made that call. Wilson was trying to get the public to associate Madrid (Patsy she called her) with hispanic politicians with crooked reputations. Manny Aragon's name was rumored to be in the indictments; certainly this would hurt the Madrid campaign. Heather Wilson and her mentor Pete Domenici wanted those indictments now...not after the election.

To his credit Iglesias did not rush the indictments (In fact they have yet to come down). But he also did not report their phone calls to the Justice Dept. like he was supposed to. Would the Justice Dept. under the Bush administration have done anything? Who knows. Would the calls have been made public at that time? Probably not.

Still, I am sure that Iglesias was certain that he was doing Wilson and Domenici a huge favor in "forgetting" about the calls. Maybe that seems obvious, but this would then be yet another violation of the public trust...and something that Iglesias probably would not admit to doing without being "under oath." He will be under oath next Tuesday.

So there were two actions here. Wilson and Domenici sought to influence the timing of legal proceedings, and Iglesias hid their phone calls. He hid them until he was fired.

How he must have felt everything was going to be okay! Sure he hadn't rushed the indictments surrounding the building of the courthouse, but then he had something on Wilson and Domenici as well. He was keeping their secret.

Until he was fired. What really burned him up was the reason given for his dismissal: poor performance. Livid, he recounted those phone calls, and chose not to go down alone.
Posted by johnny_mango at 5:57 PM 4 comments: