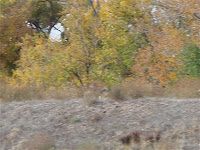 NORTH BOSQUE BIKE TRAIL--Don't tell me you can't recognize that blur on the ditchbank as a coyote. He really looked fat and healthy. And fast. I took the shot, but had to do it one-handed with the LED washed out with sunlight while I was riding my bike.

Nevertheless, that IS a picture of a fast-moving coyote just south of I-40 and wes 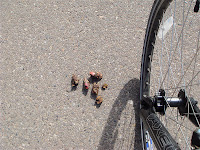 t of the bike trail. Then I happened upon several piles of coyote scat right on the trail.

Many of you know that coyotes like to mark the territory with scat, even to the point of depositing it on top of rocks near a trail.

Well anyway, I was riding along and swerving to keep my tires fairly clean when something red caught my eye in one of the piles. I rode on for a ways, then told bike-partner Bob, "I've got to go back and look 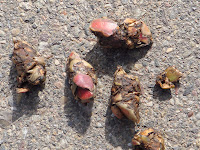 I didn't want to tell him it was a pile of shit.

That shit had a lot of red in it. I looked closer. I thought there must be fingernails in there. I got off my bike and looked a lot closer. Nope. Apple skins. What a relief. That coyote is eating good. No wonder he looked so fat and sassy.
Posted by johnny_mango at 6:56 PM 1 comment:

Those Little Lights that MaryAnn Loves 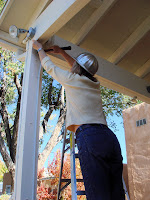 NOB HILL--It looks like we are putting up Christmas lights...and we are. But not for Christmas, which is still almost 2 months away. MaryAnn loves those little lights and this time of year the stores are full of them.

We bought the lights at Walmart: 2 bucks for a string of 70 with white wire. We used 4 strings. We also got fasteners. The lights really are beautiful. Actually the whole world is beautiful in our backyard. Especially when MaryAnn is there. This year it is still so warm that we use the outdoor area quite a bit. The temps are in the middle 70's and it is Halloween tomorrow.

Everything we have done in the backyard has been worth the effort and money. We love it. It is not finished, but still it is so peaceful, useful, (and delicious). 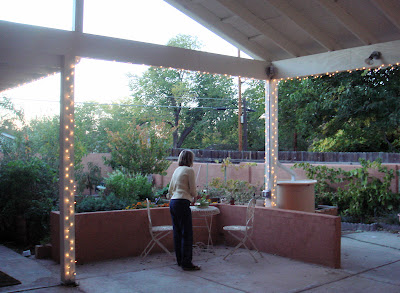 Posted by johnny_mango at 8:27 PM No comments:

Jesus is a LIBERAL 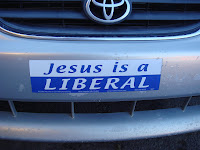 NOB HILL--The New York Times has a long piece today called The Evangelical Crackup. It is the most popular emailed article of the day.

For the last couple of years I have stated that the next big political battle in America was going to happen within Christianity. How could the Christian church support war, torture, lying to the American people, moral hypocrisy, and the government being in bed with religious zealots.

Well, this "Jack Spratt" coalition of the rich and the religious is coming undone. Thank God.
Posted by johnny_mango at 9:12 PM No comments: