Why is the photo of you in the sidebar one taken in front of an open refrigerator?

Usually when interviewing a Mango, "Why?" is never a good question. However, we might as well examine the picture for clues. 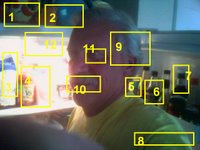