One More Click on the Big Clock: The Burt's Tiki Lounge Neon About to Bite the Dust.

DOWNTOWN -- Some of our best neon signs hung in front of bars.  Now Burt's, according to an early post on Albuquerque's Craig's List, is about to be dis-connected and de-hung.  I wrote about it on my FB page.

They were giving it away for FREE to anybody who was willing to remove the whole thing.  Here's a screenshot of the ad. 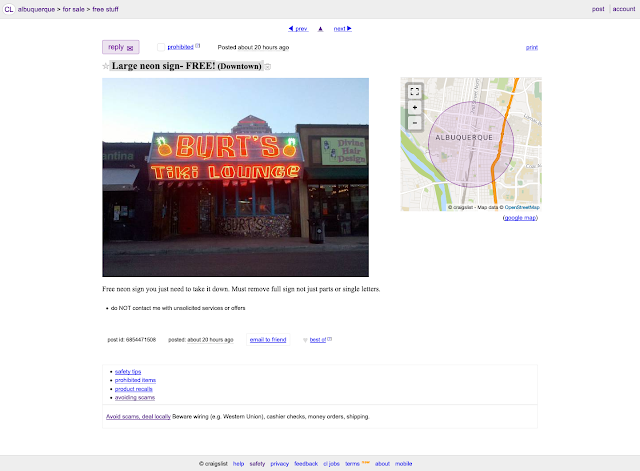 Other signs I miss (but not the bars particularly) were The Tropics Bar and Jacks Or Better Lounge.

The Tropics Bar sign was a kind of a leafy palm tree that reminded me of a poor man's Paul Klee.  The Jacks Or Better featured a pair of jacks in neon surrounded by flashing incandescent bulbs.  It was glorious.

The Tropics sign was destroyed.  Jack's was taken back to Zeon Signs were it was repaired and apparently picked up by a private party.  I heard somebody say former mayor Martin Chavez ended up with it. 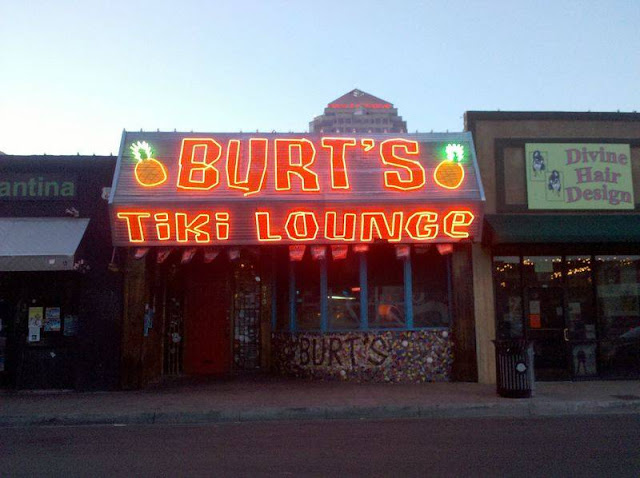 At any rate, here's hoping the city or a museum sees fit to preserve it...even if they don't know what to do with it at the present time.  Neon itself is endangered.  Twenty years from now, nobody in New Mexico will be making neon or even repairing it.  Let's hang on to what we have.
Posted by johnny_mango at 3:35 PM