Archie and Ray Stacking Pinon At My House 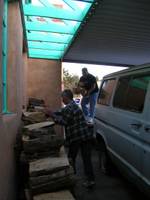 NOB HILL--Around two years ago, I was making room for MaryAnn to move in. I had a yard sale that featured, among other manly treasures, over 50 tube-type radios. None of them worked. It takes a special person to see value in such a collection. At any rate, Ray Rael was on his way home to Grants from Isleta Casino where he had scored big. How he ended up in Nob Hill I don't know, but he bought a pickup truck load of radios from me. I bought a pickup truck load of wood from him. We came out about even.

By the way, since our "radio" days, Ray has been fighting cancer. He worked in the uranium mines in Grants...even scraped out the yellowcake from the ovens. He was going to Tucson twice a month (over the same route Mike and I rode) for treatment. But he is feeling better, and he looks great. If you need wood...