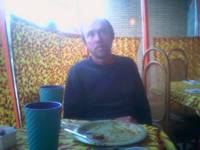 DOWNTOWN--Tuesdays and Thursdays Bob Evans and I ride the river bike trail end to end. We get hungry, very hungry. To top things off, Bob is so particular about food, and so knowledgable, that he should be doing a weekly TV show from his kitchen. So when we stopped in at a new restaurant, I wondered what he would think. Look at his face. Look at his plate. He liked it, and wanted seconds. The restaurant was called Wrap It Up on the corner of Coal and 10th. They moved there from the old Tito's Bar location on 4th NW. This building used to house Carlito's restaurant. In fact, what they did was combine Carlito's menu with their own...so now it serves wraps and Mexican food. Cheer up Bob, have another carne adovada burrito.
Posted by johnny_mango at 1:12 PM