The Old Mission at Zuni Pueblo 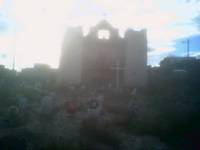 The Zunis convinced us that we ought to spend the night at the b&b in Zuni Pueblo rather than camp by the side of the road near the Arizona border...after all, it was cold, windy, in the middle of what they called a "spooky" area, and Halloween. Also, it was near the only bar in 50 miles.

So we stayed at The Inn at Halona. It was just great, and cost $80 for the two of us including a big, hot breakfast. It gave us time to wander around the pueblo and even go to see the "Santo Nino," a statue whose origin in Zuni history goes back to Coronado's passing. Care of the statue is handed down from generation to generation. I do not feel comfortable writing more about it, but there is a house in Zuni with "Santo Nino" written above the door. Go in there. The statue is in a large sort of living room. The Santo Nino also has a bedroom which we did not get to see.

While we were there, the statue's guardian was explaining the stories to us when an old pickup drove up. A middle-aged cowboy got out and helped an older cowboy into the room. I took them to be father and son. The father went up to the Santo Nino for a few moments and spoke softly. They sat quietly on a couch for a little bit, then went out to the pickup and drove off.