Global Warming: Is It Too Late For the Don Eno Solution? 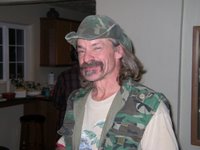 NOB HILL--Don Eno came over to our open house on Christmas Eve. It got me thinking.

As I see it, the global warming problem stems basically from the amount of carbon we have dug out of the ground where it rested and put into the atmosphere where it is bound to change things. We explore the world over for more and more oil, coal, and natural gas. We have gone back millions and millions of years to unearth the fossilized remains of giant plants and put all that carbon back into play.

Think about what life on earth was like when those plants were alive...dinosaurs...giant lizards...steaming huge plants big enough to support those forms of animal life. Well, that is earth when we re-carbonize our atmosphere. We get giant plants to convert the carbon into leaves and stalks, and giant animals to breathe all the oxygen they give off.

So not only will the earth be warmer, we'll have those nasty dinosaurs shagging our hot and weary asses. Some future. 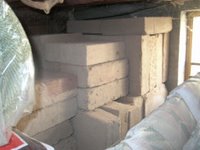 Then there is the Don Eno solution. You may remember that Don Eno is my neighbor who dug out a basment under his existing house and used the dirt to make adobes. He had to leave the state so he stored the adobes back in his basement. The point is, that if we give Haliburton a contract to extract the carbon from the ground, maybe we could give them a contract to put it back!

If I am wrong on any of this let me know. I am, after all, not a scientist. What about the following points:
I don't think it matters whether carbon is taken out of the air and temporarily turned into plantlife. It will re-enter the atmosphere soon enough. And what exactly caused the coal and oil to be laid down in the earth all those eons ago? A cataclysm? A slow deadly atmospheric poisoning of huge portions of the earth...like a rotting stench that eventually even enormous jungles couldn't keep up with?

Oh, MaryAnn and I wish you all a happy New Year.
Posted by johnny_mango at 5:03 PM

Don't let the "I'm not a scientist" schtick fool you, fair readers. John_Mango's right on the money here. It's called "carbon sequestration," and it's a hot area of research and policy discussion of late. Check out Wikipedia's summary for a starting point: