NOB HILL--In the decade from about 1965 to 1975 America sorted itself out by generations and reshuffled the population. Everyone under 30 hit the road. Wandering from coast to coast, city to farm, midwest to anywhere else, thousands of us ended up in the Land of Enchantment.

We were a generation of slogans...(you can probably think of a few besides "Make Love, Not War"). One of them was, "Sneak In." This phrase was rooted in the belief that there were enough material goods and waste in this country to take care of everybody without working full-time to support your Spartan lifestyle. And at the center of this "Waste not, want not" philosophy stood the Volkswagen bus. 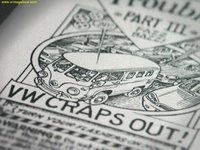 If you are over 55 you probably owned one or rode in one. It was economical, simple to fix, and was still big enough to sleep half a dozen friendly people. And fixing them was part of owning one, a big part of owning one.

The Bible of those times was John Muir's book "How To Keep Your Volkswagen Alive: A Manual Of Step By Step Procedures for the Compleat Idiot." The illustrator was Peter Aschwanden. He died last week in Santa Fe of cancer at the age of 63. John Muir died in 1978.

There was no "how-to" book that was more popular for that generation: almost 2,000,000 copies have been sold in 3 languages.

I was living on Canyon Road in Santa Fe in 1970, sharing a house with 3 women and another guy. One day he decided to rebuild the engine of his VW bus. He was sort of a small guy, maybe weighed 120 pounds...but this didn't stop him from taking the engine out of his bus by himself. The bus was backed up against a wall. He got in there behind the bus, undid 4 bolts, grabbed the engine with both hands, and pushed the bus away from the wall with his foot. He was left holding the engine, which he carried into the house and set on the kitchen table. He opened up his Muir book and rebuilt the engine right there.

You can read the Introduction to the book page for page on Amazon. The ABQ Journal Business Outlook ran an excellent article on Peter Aschwanden in 2001. Written by Emily Van Cleve, it is certainly worth reading.
Posted by johnny_mango at 9:38 PM

Reminds me of this kid who - along with his father - lived in the same apt bldg as I did in Washington DC. He bought a broke down Karmen Ghia and rebuilt it himself, right on the street in front of the building. Before too long someone had brought him a second one to repair and eventually a third and fourth appeared -- all of which he rebuilt over the course of the summer. He was maybe all of 17 years old and that ended up being his summer job.

Don't think too many kids are going to be able to do the same very far in the future.

I loved this book, and I wish I still had my copy (but not the Type III that led to me purchasing the book!).

It also ruined me for dry technical books forever: they're all judged subconsciously against it.

I bought my copy of VW manual when I got my first bug in 85. It's been been 18 years since I've had the bug but I still have the book. I just bought another bug and dug the book out of the closet. It's well worn but still together. It's the spiral wound type. Now I'm scanning the pics into my computer. I know they will make a great screensaver at work.
Dick K

Bought the German translation after hearing about it on the radio. It became an unputdownable book and I was hooked right away. Although my passion was the camper bus, I got an old 66 Beetle and rebuilt every bit of it. Two years of my life spent learning loads!

It's got a be one of those Desert Island Books. As Richard said, other tech manual look very pale compared to Muir's masterpiece. I just wish he had written more of the kind. The drawings are absolutely key to the book and make it such fun to read.

I'm putting a copy of one of the
10th printings (1973) up on eBay & was looking for some background on the book. I bought it at a garage sale for a quarter & the guy selling it said it was like his Bible. He lived with it for years & used on his Volkswagen.

It's like an original with the spiral binding & all the illustrations. I'll use a quote from the blog in my blurb. Thanks, guys!

I still have my "perica" (parrot, monkey-wrench) a 1973 automatic, 7 place, 1,700 cc air cooled, transporter T-2, in a two tone green livery. It is my daily transport & mobile shop for old VW's. Has been working for the last 12 years, needs a repaint. I take the road to whatever destiny, I do it's maintenance.

John Muir's book & Peter Aschwanden ilustrations, are the BEST EVER...

The old VW's were classics and were themselves honoured by the "Idiot Book" - the best how-to manual ever written (and illustrated).

I have not owned an old VW for a quarter century, though I hope to do so again before I die. I still have my old spiral-bound copy of this book, minus the back cover and much the worse for wear. Every now and again I pull it out - the dog-eared and grease-smeared pages are like touchstones that remind me of the trials I experienced with the Type 1 and Type 2 vehicles that served me so well.

I was a compleat idiot, but then, as now, that book served as a mentor - I knew that with it in my hands I could do things way outside my mechanical comfort zone and, miracle of miracles, have it work out.

All youngsters (of all ages) should have people like John Muir and Peter Aschwanden to teach not only the how-to, but the why-to as well. That was the point of the book - understanding. We could all use more of that.

taught me an awful lot about VWs in the l ate '60s when I was a grad student-vw idealist, trying to rebuild (and breaking 40 hp engines right and left. I learned a lot from the book and the trippy illustrations that never failed to get my attention and add perspective to the greasy nitty gritty details!!

jonn and Peters book set the stage the Fabulous Furry Freak Brothers of the VW Repair World at that time, and I was one of them!
RIP Brother....
fallsoffmotorcycle, CA