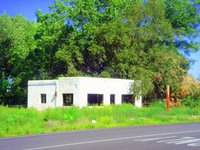 CENTRAL & THE RIVER--Everybody starts wondering about it: can't we work a bike trip and train ride into the same adventure?

Bob Evans and I decided to do it yesterday. We started from the aquarium at Central Ave. and rode north on the Bosque bike trail. At Alameda we headed east on a good bike lane all the way to 4th St. We turned north onto a 4-lane road with no shoulders. There was little traffic, however, and we soon turned onto the back road to Bernalillo. 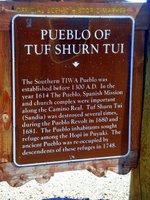 This is the pre-1937 version of Route 66, when it had a big jog in it as it came south from Santa Fe before turning west again in Los Lunas. It is hard not to be reminded of the glory days of this road 70 years ago.


Little has changed. Sandia Pueblo is much the same, at least from a distance. The Hedges Oil station is still standing as a silent witness...much like a stagecoach stop in an earlier age. Of course El Camino Real pre-dates all of this by 400 years. And Sandia Pueblo was an important stop. After having b 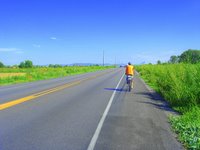 een burned to a crisp during the Pueblo Revolt in 1680, the present site was resettled in 1748. All this history...and it's only a bikeride away.


We continued north. Almost all the traffic was heading south. Somehow the impossible had happened and we had picked up a nice tailwind. It is only 6 miles from Shady Lakes to Bernalillo and it went quickly. It was a lovely day and we felt like we were riding in a postcard universe. 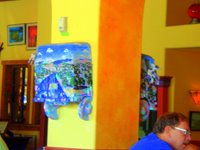 If you recognize this VW bus stuck in a beam, you know where we ate. We had made the leisurely trip in 2 hours (don't forget the tailwind however) and had plenty of time after lunch to ride the mile or so over to the rail station at US 550 for the 12:05 RailRunner back to downtown Albuquerque. The sun was still shining and we were still living in our magical universe.

We secured the bikes in the provided straps and enjoyed the trip back into town. A 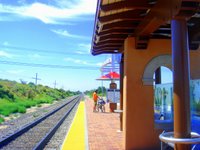 ll in all, it was an excellent adventure. We had left the Aquarium about 9:15 and got back to town at around 12:30.

We rode west down Gold, Silver, and Lead eventually coming out at Tingley Beach. It was only another mile north to the car. 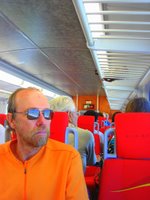 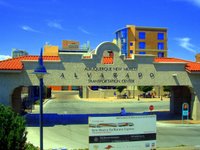 So nice to see Downtown ABQ and the "Alvarado" from the tracks, the way it's supposed to be.

I've got some video of the ride between Journal Station and the US 550 station, as seen from inside the cars, at http://blip.tv/file/100444