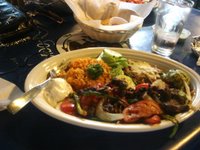 CENTRAL & YALE SE--"My God!" she screamed. "I thought they were bell peppers!" MaryAnn reached for her water. In most restaurants those green things in your fajitas ARE bell peppers. But Bandido's Hideout is a Mexican place and they use jalapenos instead.

She grabbed my tortilla and stuffed part of it into her mouth. When the food is really hot, water doesn't help. She later said, "I thought I was go 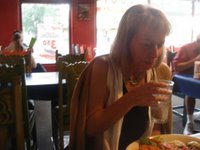 Bandido's is probably more famous for its advertising icon than for its food. You know, the guy in the median who drinks a large coke wearing a Mexican wrestling mask and a signboard. He never smiles; he never moves; he just points with one hand to the restaurant and holds his drink with the other.

At any rate, the meal was good except for the jalape 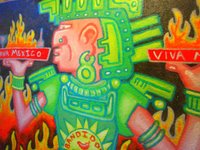 nos which kept bursting into flames on the plate. I had actually hoped for something more relaxing and romantic...something that would prompt MaryAnn to say something other than "Call 9-1-1! My tongue just exploded!"

So I kept quiet...trying to wait out the pain which was still causing my Beautiful GF to suck ice and chew on beans and lettuce. No wonder so much Aztec art seems to center on a scowl on the face of the deity: indigestion. That fiery sun painted on his belly is there for a reason. 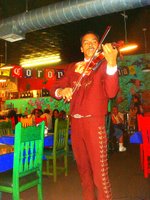 usico started singing and playing. And his music transformed everything. We were somewhere else living in a romantic dream. It was peaceful and intense at the same time. The colorful decorations of Bandido's all made a kind of sense. And romance was in the air.

After a couple of canciones we got up to leave. That was when the trouble started. She had to use the restroom and left me standing there by myself. All of a sudden I heard the opening chords of that anthem of the border: Volver!

Now I don't know all the words. The only part I really know is "Volver...volver...volver." This I usually sing with all my heart and as loud as I can. And I could feel the song coming around to the chorus. MaryAnn came out of the restroom. She just stood there looking at me.

"VOLVER...VOLVER...VOOOOLVEEEERRRR!" I shouted at the top of m 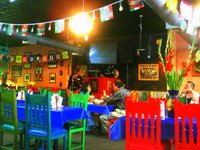 y lungs with a good amount of ernest vibrato.

MaryAnn's mouth dropped open in total shock! But no one had heard me except her. There was a lady at a table who was singing even louder than I was! Her husband just nodded at me and smiled.

El musico went on with that sad song of love. MaryAnn and I left by the back door.

I can relate to that song.. and the food..There a place downtown Tucumcari called the El Toro run by the Molinas Family..they were musicians aS WELL...gOOD FOOD AND NOT AS NEAR HOT..!!;)