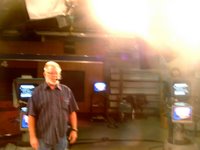 NOB HILL--Wednesday afternoon I got an email from Channel 4's Nicole Brady asking me if I wanted to be on "Eye on New Mexico" Sunday morning. Besides Ms. Brady and me, Mario Burgos and Dennis Domrzalski will be there. It airs at 10:30, right before Meet the Press.

The show is on blogging and how it is changing the dynamics of the election. It concentrates on the Madrid-Wilson race because of Mario Burgo's uploaded video of the entire Congregation Albert debate. Domrzlski's premise is that Madrid didn't want the entire video to be shown.

Of course I said, "Yes! I'd love to be on the program." But I wasn't easy. I had conditions.
It was pretty chilly in there. The boiler was out. Boiler? Kind of old-fashioned...but then this TV station has been around long enough to be called a local treasure. The 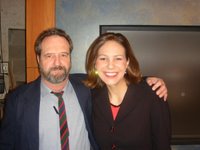 receptionist's desk still has that colored peacock on it. And the Spanish style furniture harkens back to an era when we were proud to say "New Mexico" in everything we did.

I cannot imagine a more unlikely couple to host a show than Dennis Domrzalski and Nicole Brady. He looks like he g 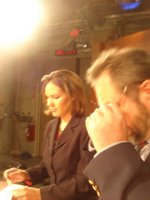 ot dressed in a camper out in the parking lot, while she...well, let's just say there must be a full-length mirror somewhere in her house.

When The Artist Ken Saville heard that I was going to be on a show with Nicole Brady, he sat straight up and said softly, "You know, she does that thing with her lips..." And I didn't think he even watched TV.

Mario Burgos, meanwhile, noted that he and I looked our parts. He did look very Republican: power suit, white shirt, gold tie. I should have asked if that tie 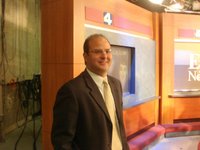 And it's orange, the shirt, bright orange.

I'm consumed with jealousy and quitting my blog. Coco

Jon, I had a blast. I hope we can be on another show together soon.

Saw the show, I enjoyed your views and way to hang in there, I thought that you had your hands full with Mario and Dennis, but you handled yourself well. Thank you for taking part and sticking up for us that would have been run over had it not been for your insight. Character, counts only if you don't want to deal with the issues, well done! Thank you again.