"The BLM won't work with Jim Baca," he said. So I Called Them Up. 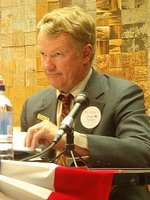 NOB HILL--Last night's forum with the candidates for Land Commissioner had more than a few interesting moments. But when Patrick Lyons (pictured at left) said in a louder than usual voice, "The BLM won't work with Jim Baca!" it certainly got my attention. That is quite a charge. He repeated it later in the forum: "The BLM is not going to work with Jim; they'll work with me."

So I called up the BLM's Santa Fe office and talked to Acting State Director Dave Sinclair. He said, "Over many years we have had a positive relationship with the State Land Office. We have similar responsibilities. And I mean over many, many years." 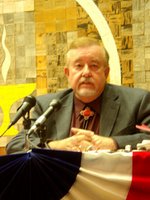 ner no matter who wins." To do otherwise, he continued, would not only be "inappropriate. That would be illegal."

And here I thought that Patrick Lyons had some secret information. But no...the BLM will work with the winner...period.

By the way, see those Baca and Madrid logos on the righthand sidebar? I put them there to be open. You know whom I support. Furthermore it means I have to be honest, because anything even slightly suspect will be dismissed as prejudiced. But ALL history and its reporting is a Construct of someone's mind. Something to remember when reading "news" stories or headlines published without a by-line. With that out of the way...

Here's more from the forum:

"I have never once been accused of being unethical or dishonest." --Jim Baca

"I'm a rancher. I know how to take are of the land." --Patrick Lyons

Baca bemoaned that it took so long to begin development of Mesa del Sol which is only 4 1/2 miles from downtown instead of pushing westward to the Rio Puerco which is 17 miles away.

"Balance--that's what we've done better than any other Land Commissioner." --Lyons (Yet a reading of his list of contributors shows no balance at all...it's all oil and gas money).

Baca talked about a current Land Office plan to "chain" down 100 square miles of Pinon and Juniper. The downed trees are to be fed into an incinerator (also called a bio-mass fuel plant). Lyons had no response to that item.

If you want to find out more about Jim Baca, I have written two different posts on him for the Duke City Fix. His blog and campaign site offer more info.

thank you for setting the record straight and for helping to keep voters informed about this key race.