NOB HILL--A debate between Gov. Bill Richardson and Republican John Dendahl might be good television, but not good for much else...except to distract us from our real problems. The war in Iraq, problem #1, is a hard enough issue to face. Many people just hope it somehow solves itself...thinking about possible solutions is just too difficult. In fact, thinking about Iraq is painful.

So along comes the Jerry Springer Show right here in New Mexico...featuring Bill "Too Big for his Britches" Richardson and John "The Hate Meister" Dendahl. It may be dressed up as a political debate, but it is just trash TV! There is no real contest here. The governor's race is OVER.

This show is really about kicking the Madrid/Wilson race off the front page. There are only 5 weeks left in the contest and if there is one thing that the ABQ Journal and Tribun 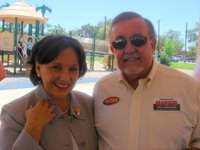 e DON'T want to talk about, it is anything to do with the real problems in America and how Madrid's election might actually change the course of the U.S. Congress.

I am sick of non-issues sucking up the oxygen in this election. Here are my top 5 distractions on the way to thinking about the real world: