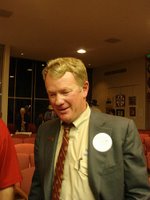 NOB HILL--I wasn't the only one writing about Patrick Lyons' statement that the BLM wasn't going to work with Democrat Jim Baca if he got elected. Steve Terrell, writing for the Santa Fe New Mexican on Thursday, quoted Lyons saying the same thing.

This morning's edition of The New Mexican contained a letter from the BLM disputing Lyons' remarks. I had called the BLM office myself Thursday morning with questions about Lyons' comment and talked to the Acting Director Dave Sinclair (Director Linda Rundell was out of town). His remarks to me are very, very similar to those published by The New Mexican in today's Letters-to-the-Editor column.

Either the BLM chiefs had already discussed the issue and readied a carefully worded response before I called, or they did it shortly thereafter. In any case, they felt obligated to set the story straight: the BLM will work with whomever is elected.
Posted by johnny_mango at 7:13 PM