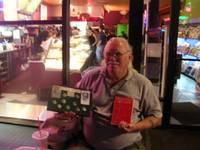 NOB HILL--Certainly a fixture if not an icon, Thomas usually parks himself right outside the door of the Flying Star. Thomas is CEO of an experimental free market laboratory headquartered right there on that tiled bench in front of the windows of the FS. His is a niche business...researching the impulse buying habits of boulevardiers, shoppers, and the moneyed hungry.

In the past he has tried out such items as horns (Texas longhorns, this is), Mexican plaster statues, arrowheads, and assorted 20 passenger busses. For the past month he has been trying to unload Pope John Paul II medals. "At first people were snapping them up," he said. "But for the last couple of weeks nobody will even look at one." It looks like the popularity of John Paul II is fading rather quickly.

I asked him about "fast-track" sainthood for the dead pope. He shook his head and chuckled. He picked up the case of 9 Pope JPII medals he has been trying to sell since the middle of May. "The free market says it won't happen. The old boy has run out of steam."
Posted by johnny_mango at 5:08 PM