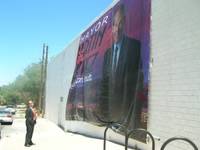 We stopped to take in the infamous Mayor Martin Chavez signs. These are the so-called "Little Phoenix" posters. They were named not just for the picture of Phoenix-like urban sprawl, but in honor of the Edward G. Robinson character in the movie Little Caesar.

It seems they had to put poles and cables on the signs because they were against the law...too big and too early. Scarantino says you can't put up campaign signs until 60 days before the election. I guess raising them at night makes them portable. It also stops those nightly visits from taggers.
Posted by johnny_mango at 9:18 PM