Speculations on the Manly Psyche of Xeriscaping 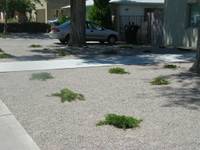 TULANE & SILVER SE, NOB HILL--Man will impose order on a seemingly chaotic universe. And here students of manliness have noted there are only two basic types of order: stripes and polka dots. These may be seen as the male and female elements of life itself. (Or as alternating themes on the necktie of life, so to speak). Even here, standing on the corner of Tulane and Silver, it becomes ever clearer. On the west side of the street, home to the psycho-office of Dr. Sam Roll, we see the polka dot theme expressed in those short, spiney juniper bushes everybody hates.

Now what does this mean? Is Sam trying to make a statement? Is he saying, "Yes, I have a feminine side, but it is small and prickly?" Who knows. Maybe he was just cheap when it came to bushes.
Posted by johnny_mango at 8:23 PM