Missed the Ceremony...Great Poster Though 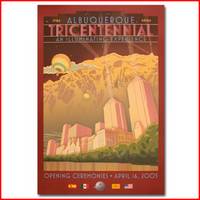 NOB HILL--Well, it looks like I missed the opening ceremony by about 6 weeks, but man what a great poster! Unfortunately, a hard copy is pretty expensive on the tricentennial store website ($40). But it is 24" by 36" and in a limited edition of 1000. It was done by Albuquerque artist Ted Slampyak.

Now an Albuquerque resident, Ted's still involved in comics - he's the artist for the long-running comic strip Little Orphan Annie, and also does his own weekly comic strip, JazzAge, which can be seen on the web at www.jazzagecomics.com and which was voted one of the Best Web Comics of 2004 by Webcomics Examiner, a leading journal of online comics. He's also contunuing his impressive career as a freelance illustrator, designing the creative material for the 2002 New Mexico Advertising Federation Association awards. He was recently commissioned to illustrate a series of posters for Albuquerque's Tricentennial Committee, to celebrate the 300th anniversary of the city.

Ted lives in Albuquerque with his wife, Jennifer, and their dog, Marty.

Marty? He has a dog named Marty?
Posted by johnny_mango at 10:50 PM

Well, I'm "his wife Jennifer," so I can tell you, it's true. He's named after Marty Robbins, not Marty Chavez.

Thanks for the info Jennifer. I take it the dog sings along. Great poster.