Will All These Lofts Stop the Party? 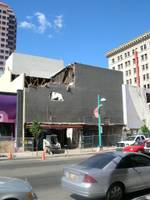 DOWNTOWN--Albuquerque is facing a contradiction that maybe only more lofts will solve. That contradiction is the mayor's hard stand on individual drunk drivers and the downtown drunken jamboree that closes down the main street of town 2 nights a week. How can Albuquerque endure both at the same time?

On the one hand Mayor Chavez wants the right to seize vehicles of "drunk" drivers before they are even convicted, and on the other hand Central Avenue is host to a "spring break" type gathering that shuts down the major thoroughfare 104 nights a year. That sounds like it is bound to lead to more than a few drunk driving arrests.

Incredibly, a metro court judge told me that even though taxis were supplied one weekend, they were not allowed beyond the barricades...so most drunks found it easier to just drive away, rather than look for a cab a few blocks down the street.

I can't see our mayor angering all those partiers before an election...especially since nobody is pressuring him to do anything about it. So he won't. And he will still act like he is tough on drunk drivers. Maybe he is, but he doesn't seem very smart.
Posted by johnny_mango at 8:51 PM