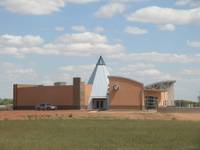 BOSQUE REDONDO, EASTERN NEW MEXICO--This is the new Bosque Redondo Memorial which is to have its grand opening June 15th. It was designed by Navajo architect David Sloan of Albuquerque. It is only half built because they ran out of funds. They are a mere $600,000 short. And this is so important for the healing and learning processes of all of us. In fact, it is about to be designated a Site of Conscience by the International Coalition of Historic Site Museums of Conscience. There are currently only 14 such museums in the world.
Posted by johnny_mango at 9:25 PM