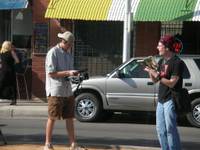 NOB HILL--It looked a little bit nutz. They were standing in the median right there on Central Ave., Route 66 for Pete's sake. One guy was reading from A Tale of Two Cities at the top of his lungs, and shouting after passersby. The other guy was filming him. I just had to go ask them what was going on.

David and Lance told me they were filming a "Mockumentary." Well, okay. I hope they read this and tell us about it in the comments section. Meanwhile, I am reminded why I am so happy to be living in this neighborhood--where things like this, while unexpected, are not that uncommon.

Here's to you, Lance and David. After all, Rt. 66 is the Mother Road, the road of dreams, the ribbon that binds us to each other. And as for the "two cities," would Chicago and L.A. fit the bill?
Posted by johnny_mango at 8:17 PM