Ridin' a Double...Headin' for Trouble 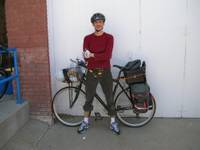 SILVER HILL--While I was waiting for a few adjustments to be made on my new bike, in walked a New Yorker named Sibje7, just off the train and on his way to the Grand Canyon. He searched through the sale bucket for a tire, pleading he had no money. I gave him some advice on a route, as he really didn't seem to have thought it out.

He was trying to stay out of the mountains. I said that the mountains were the best part of the ride...especially given that he was alone and water or rescue are both hard to come by if he tried to stay north of I-40. But he was riding a double chainring, so I don't blame him for looking for a flat route. Here is what I told him: Grants to El Morro, Zuni Pueblo, St. Johns, Show Low, Heber, and Flagstaff. Anybody got a better idea?

I also told him to take a bunch of water. I am not convinced he is ready for what may be ahead of him. But who knows? What an adventure.

One thing, though...I probably should have mentioned he probably won't need that New York bike lock he was wearing for a belt. That must weigh 5 pounds.
Posted by johnny_mango at 8:02 PM